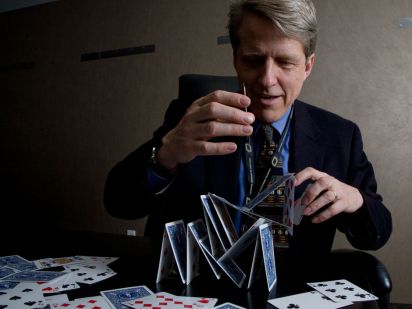 Davos. The name says it all: it’s a small alpine town, but at the same time it’s an event and a symbol that awakens passions. Davos is the venue of the most important annual event organized by the World Economic Forum, which brings together millionaires, politicians, business owners, and thinkers.

One night I attended a dinner with the most influential economists nowadays. To be honest, I had low expectations; I thought they would follow the script and be very careful with their comments. Luckily, I was wrong.

I sat with Robert Shiller, Nobel Laureate in 2013, a visionary who wrote about the stock market bubbles before they even occurred.

That evening, Shiller decided to share an idea that haunts him: the power of narrative to influence human behavior. “Most people think through stories, but us, economists are terrible with narrative” he said.

Shiller explained that the same epidemic models that trace the propagation of a virus may be used to describe the verbal transmission of an idea. Some ideas, of course, are great and must be shared. However, others may have a negative impact on the economy once they become viral.

For example, during a recession, many people decide to spend less money or to postpone the creation of a new business. They could make any of these decisions as a response to the recession itself (in other words, the feedback), but to understand a recession, we need more than a theory of feedback. We have to consider that sometimes the main reason why a recession is severe is related to the prevalence of certain stories, not purely economic feedback.

Shiller explained that the viral narratives increased the depth of the Great Depression in the 1930s. The first Sunday after the market crash in October 1929, the religious leaders of the time used their sermons to attribute the market decline to the “moral and spiritual excesses” of the 1920s. The sermons made it to the covers of the newspapers on Mondays. People drastically reduced their expenses and companies went bankrupt.

The narratives become viral and disseminate around the world leaving an economic impact. And, if the “fake news” era has taught us something, it is that a story does not necessarily have to be true in order to become viral.

The first time I heard the word macrofinance in Davos I thought I had misheard. But no, since the approach of the Forum this year was to reformulate the “global architecture”,  macrofinance was a recurring term.

This new way of conceptualizing the economy refers to the intersection between macroeconomics and finance and attends to the fact that in the global economy there are corporates that have more weight than many countries.

The macrofinance academics are not only interested in understanding which will be the next country whose economy will be in crisis; their main interest is to identify which firm will be the Lehman Brothers that will unleash the next global crisis.

For example, a common subject among macrofinance academics is the way in which the financial sector interacts with the real economy.

This year we will see if the term macrofinance is here to stay, if it is just a passing fad, and if it actually helped identify the Lehman Brothers of the next global economic crisis.

A popular subject in conversations, in the hallways as well as informal sessions, and of course at the piano bar (the meeting point of the night owls) was to what extent corporations should speak up in regards to their disagreement with the government. That is when a public policy affects the business, should the CEO raise his voice or remain silent? That is what is called the “CEO’s activism” in the Davos jargon.

The subject is not new, but with so many global CEO’s together, it was inevitable that the topic would emerge in the conversation

The pivot point in the involvement of CEO’s in activism took place in 2015 in the United States when the state of Indiana approved the Religious Freedom Restoration Act (RFRA), which allowed companies to use religious freedom as a defendable reason to refuse to serve a particular client. The detractors of the law argued that it allowed companies to discriminate clients from the LGBT community.

As a form of protest, Tim Cook, CEO of Apple, published an article in The Washington Post in which he opposed the legislation. Bill Oesterle, who at the time was the CEO of Angie’s List, cancelled a millionaire investment to expand the headquarters of the company in Indianapolis. The CEO of Salesforce.com, Marc Benioff, announced on Twitter the cancellation of the participation of its employees in events in Indiana.

The CEO activists achieved their goal. A week after the approval of the law, the governor of Indiana signed a revised version to ensure that it would not be an excuse for discrimination.

A week before the World Economic Forum, the global agency for public relations of Weber Shandwick and KRC Research published a study for which they surveyed 1,050 senior executives in 21 countries.

The results showed that 46% were in favor of companies speaking about subjects such as climate change, gun control, immigration, and LGBT rights. In the case of the CEO’s of global firms, the numbers were even higher, 63% claimed they have the responsibility of taking a public stand in regards to those subjects.

The two topics that took over the agenda were China and artificial intelligence (AI). On one side there were 11 public sessions on AI, more than any other topic. On the other side, the government of China proved to be greatly influential by bringing to Davos a great part of the strategic cabinet (including Vice-president Wang Qishan) and offering sumptuous receptions. Besides, Jack Ma, the charismatic founder of the technologic giant Alibaba, was all over the place in a series of private and public meetings with all the strategic groups of the forum, including the Global Shapers, community to which I belong.

However, the really interesting thing happens at the intersection of the two topics: China and AI.

During the Annual Meeting in Davos, PwC published its Annual Global  CEO Survey in which more than 1.400 CEO’s participated.

When I received the report, I immediately went straight to the section in which they describe the perceptions around the impact that  AI will have on labor. At a global level, 49% of the surveyed CEO’s think that AI will eliminate more jobs than it can create, while 41% of them believe it will actually generate the opposite effect.

However, the CEO’s from China think differently. 88% of the surveyed CEO’s of the Asian giant believe that AI will replace more jobs that it will generate. And, 60% of the Asia-Pacific CEO’s agree.

The CEO’s in Latin America showed a little bit more optimism, only 51% of them considered that the AI will cause technologic unemployment.

We will see if this is about optimism or lack of information. In the meantime, the year 2019 will put the World Economic Forum to the test as the great incubator of ideas, and we will see what concepts go from the world of ideas to the real world.